Go Mad for Maple in The County this March 🍁🥞

There is nothing sweeter than the first sign of spring, especially when that sign is sweet maple sap flowing through the trees. Here in The County, sugarbushes are already hard at work tapping maple trees and getting ready for their annual harvest.

Maple season celebrations have been impacted by COVID-19 for the last two years, and it’s no different in 2022. The annual Maple in The County festival is on hold for another year, but there are plenty of other ways to enjoy the region’s maple syrup this year. Read on to put together a maple tour and get your fix this spring. 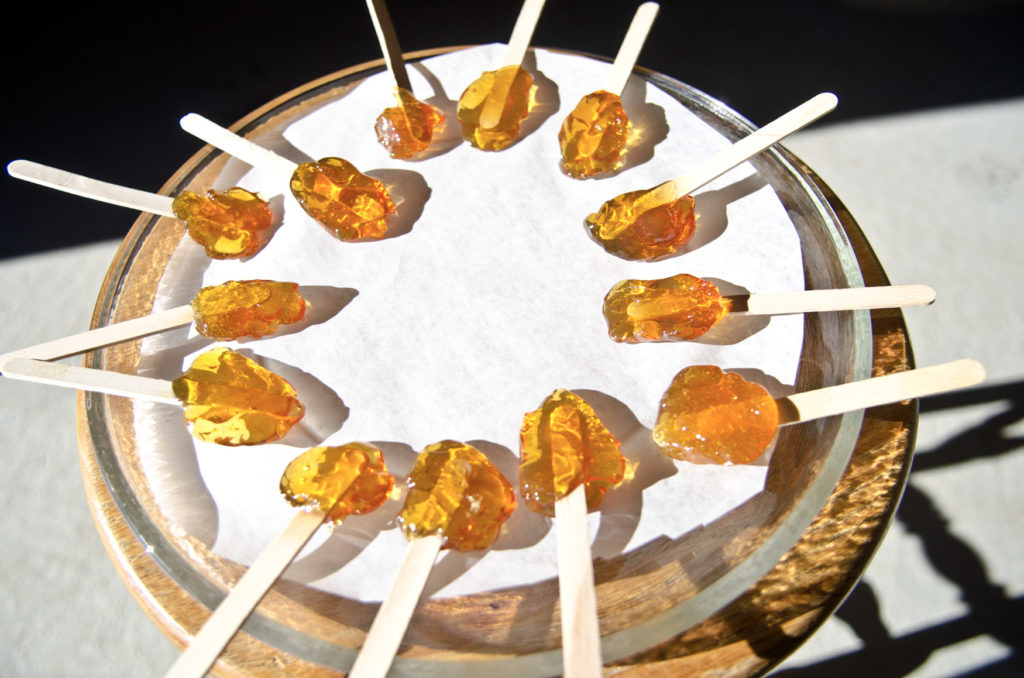 Stop by a Sugarbush

While the Maple in the County festival is not going forward this year, the sap is still flowing at the affiliated sugarbushes. If you’re looking to pick up some syrup from the source, Sweetwater Cabin/Hubbs Sugarbush, Fosterholm Farms, Vader’s Maple Syrup, Nyman Farms, Loha Farms, Roblin’s Maple Syrup and Justin’s Maple Syrup are open throughout the season for sales of quality maple products.

Maple Madness is a new event series in The County which takes place every weekend throughout March, with different events and specials throughout the area to bring you a taste of maple. In addition to maple syrup producers, craft beverage producers, restaurants, and other County businesses are getting in on the fun. Here’s just some of what you can experience this month:

Head down to Waupoos to enjoy a maple-inspired two-course pre-fixe menu experience for $35pp. These dishes are created by Executive Chef Scott McInerney and are driven by Waupoos Restaurant’s their farm to table philosophy. Don’t forget to check out their Maple-themed drink specials while you’re there. Waupoos Estates is open 10am – 3pm each weekend throughout March. While you’re there be sure to stop across the street at Clafeld Cidery & Market to purchase maple products from the property. 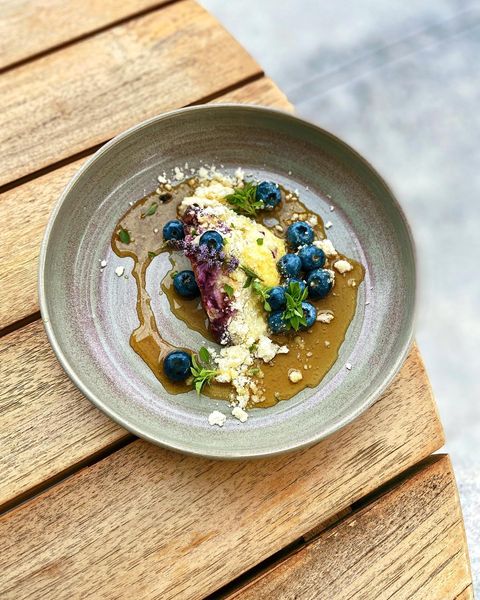 One of the maple-inspired dishes you could try at Waupoos Estates Restaurant during Maple Madness. Image by @waupoosestateswinery on Instagram.

Head to Three Dog Winery to celebrate the first harvest of the season with maple waffles and traditional French Canadian maple baked goods from Moonlight Kitchen alongside sugar shack experiences and bonfires. All of that Fun for the whole family!

Over at County Shores there’s plenty of maple-y fun to be had. Enjoy their grounds on the beautiful Bay of Quinte while playing maple trivia and enjoying a maple-inspired menu filled with delights like Maple Pulled Pork, Maple Butter and fresh Maple Cinnamon Rolls. You’ll also have a chance to learn about the maple syrup harvesting process, watching as sap turns to maple syrup in their wood-fired evaporator. On every weekend throughout March. 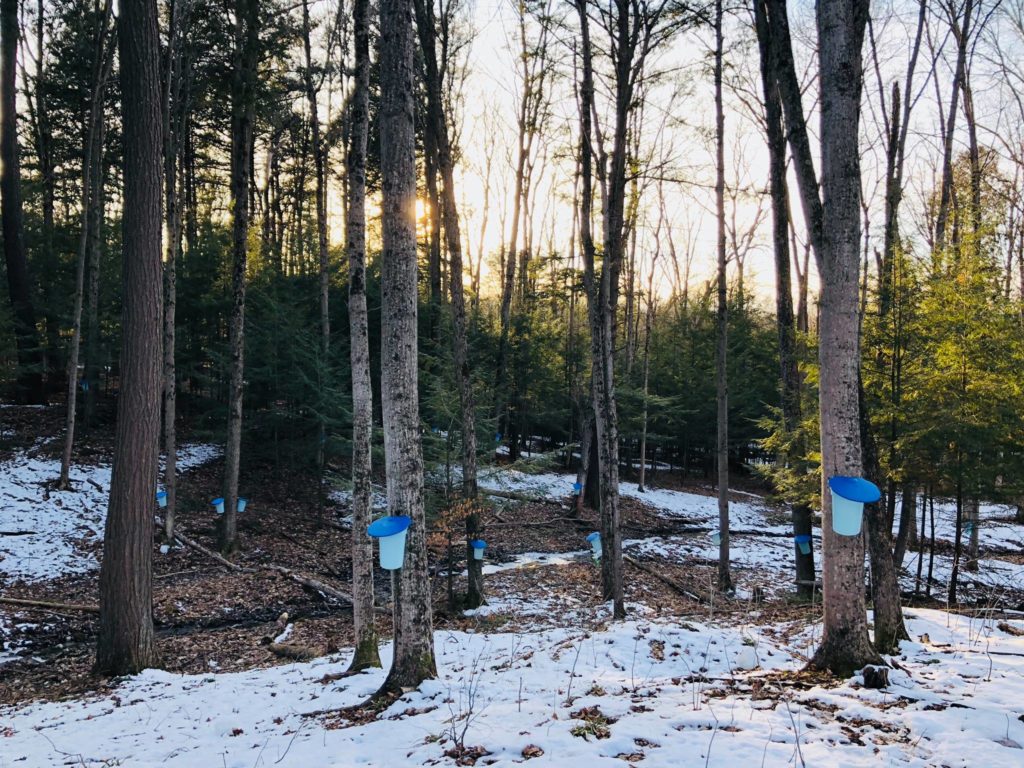 The maple harvest begins at County Shores. Image by @countyshores on Instagram.

Walts Sugar Shack is open every weekend from February 19th-March 28th from 10:00am-4:00pm, and will be serving up a pancake and sausage breakfasts to showcase the best of their maple syrup harvest (some weekends will feature other menu items – check their Facebook page for updates). The store will be open for you to purchase, baked goods, beef, pork and of course Maple featured products! Free coffee will also be available.

Head just north of Bloomfield to Kinsip for a maple-y outing where you can enjoy warm maple syrup cocktails made from their famous maple whisky and whisky barrel-aged maple syrup. Be sure to follow their Facebook and Instagram for more details.

Enjoy the iconic taste of maple at The Waring House with their Maple Cream Tea feature, plus a variety of Maple themed items on their weekend menu. Be sure to follow them on Facebook for up to date hours and menu details.

Get your hands on locally produced golden maple syrup at Koopmans Maple Mountain. This maple syrup is featured beautifully in maple candy, sugar and maple butter, which you can purchase alongside their maple syrups products while supplies last throughout March. While you’re there, be sure not to miss candles from The Sugar Shack Candle Co., which includes scents such as Maple Pancakes as part of their collection.  Note, Koopmans will not be open the first weekend in March, but will be open every other weekend.

The Drake is getting in on the fun with some maple-themed additions to their famous brunch menu. Plus, if you book a two night stay at the Drake Motor Inn this March they’ll include maple-inspired brunch for four.

County Cider is opening again after a long winter, just in time for maple season! They are celebrating with a maple-y food speicial of maple apple meatballs and maple apple hand pies for dessert. But you can’t go to County Cider without trying some of their cider! Luckily they have some cider perfect for the occasion: choose from Maple Bourbon Cider and Coffee Maple Cider in pints, or go the non-alcoholic route with mulled cider.

Make maple syrup season even more rad with a visit to Prince Eddy’s Brewing Company. They’ll be serving up a twist on their popular C.R.E.A.M Ale, this time made with dark maple syrup from Walt’s Sugar Shack. They’ll also be selling a limited number of 50ml maple syrup bottles in collaboration with Walt’s. Plus, enjoy a maple-filled pop-up from The County Canteen consisting of steamed bao buns three ways: Maple Five Spice Pork Belly with Maple Hoisin and Kimchi, Maple Soy Glazed Salmon with Maple Tonkatsu Sauce, Pickled Daikon and Carrot, and Crispy Tofu with Maple Gochujang Sauce, Garlic and Ginger Mayo, Cucumber, and Kimchi. Are you drooling yet?

In addition to Prince Eddy’s, three other breweries are celebrating maple throughout March. Barley Days, Midtown Brewing and Matron Fine Beer all have maple-y plans up the sleeves of their plaid flannel shirts, so be sure to follow them on Instagram for updates about their Maple Madness plans. 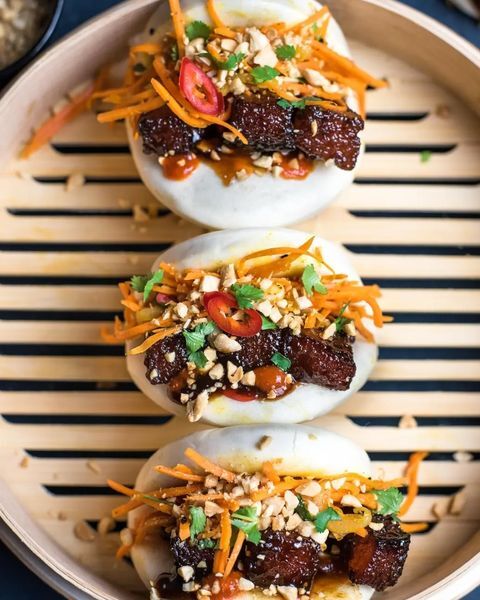 This is not maple bao, but it is bao from The County Canteen. Can you imagine the deliciousness of this bao + maple syrup? Yeah, we’re drooling too. Image by @thecountycanteen on Instagram.

Speaking of The County Canteen, they’ll also be cooking up a maple feast as their Picton Main Street restaurant throughout March. On the menu is Pork Belly with Maple Cotton Candy, a Waffled Ham and Cheese Melt with Maple Butter, and a Maple Old Fashioned. Dining at The County Canteen is first come, first served, so head there early to guarantee a table.

One of the things we love most about maple season is getting outside in the early spring weather, and a great place to do that is at Sugarbush Vineyards. Go for a hike on their 2km Walking Trail that loops through the Sugarbush and Vinyard, which is open from 11:00am-4:00pm (dogs welcome). Play maple trivia as you hike, be on the lookout for fairy doors and beware of bigfoot lurking back there! After you’re done, head back to the winery for complimentary hot chocolate and a maple cookie! But if it’s wine you’re craving, wine will be available to taste, enjoy by the glass, or to purchase to take home. Be sure to wear good boots  as it could be muddy or snowy. They will be collected cash donations or non-perishable food items for the Wellington Food bank.

Head to Lacey Estates Winery on Closson Road for 100% estate grown, small batch wines and while you’re there enjoy a perfect pairing of smoked sausage appetizers with maple cheddar and maple chevre.

Want even more maple cheese in your life. Down in Waupoos you’ll find Fifth Town Artisan Cheese where you can sample and purchase a selection of cheeses infused with the sweet nectar. Let maple chevre, maple bourbon capreggio goat taleggio, and maple chestnut rum cressy blue cheese grace your cheese boards this March.

For an Italian twist on Maple, head to 7 Numbers Picton. All month they’ll be serving up maple specials like maple-brined pork belly and maple creme brulee.

Join Norman Hardie Winery and Vineyard for some fine wine alongside home-smoked maple-smoked trout on their lunch menu and enjoy it all from their heated enclosures. While you’re there be sure to pick up some local maple syrup from their retail stores.

Rosehall Run is getting in on the maple fun with featured maple products for sale — Nyman Farms Pure Maple Syrup & Kinsip Whisky Barrel Aged Maple Syrup — alongside featured products for sampling and wine pairing, such as Maple Cheddar Cheese Biscuits with Pink Peppercorns. 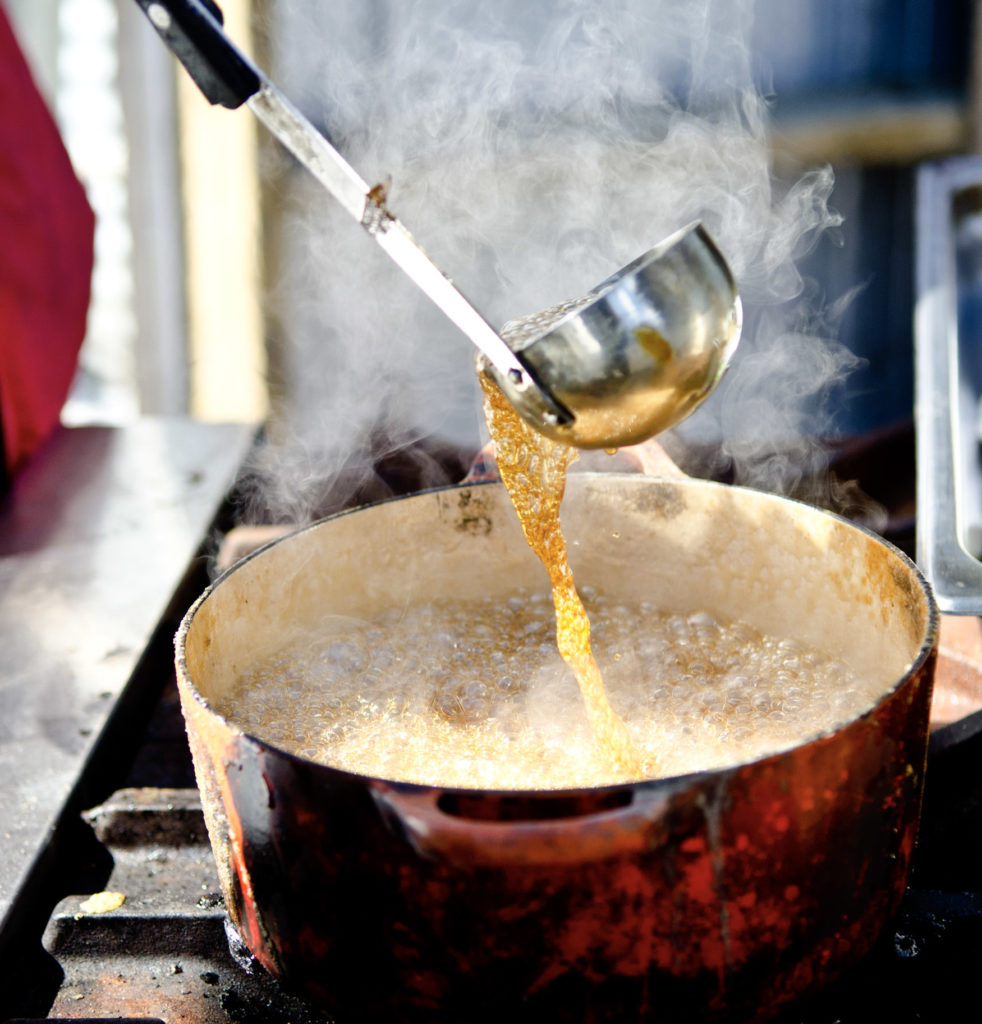 Sap boiling down on a gas stove. Photo by Terry Culbert.

You won’t want to miss maple season at Sandbanks Estate Winery. With maple s’mores, maple hot chocolate, and maple-inspired menu features each week, you’ll find something for everyone here.

At Indergaard Farm you’ll find Walt’s Maple Syrup in their farm stand alongisde their farm fresh free range eggs. They’ll also be serving up free popcorn flavoured with Walt’s Maple Syrup. If that hasn’t already made this a must-visit stop, you’ll be excited to know that you can also visit with their alpacas and chickens!

The Lakeside Motel is also getting in on the maple fun. On Fridays from 4-8PM, Saturdays from 9-11AM and 4-8pm, and Sundays from 9AM – 2PM throughout March, you can head to this enjoy maple in delicious style. Think Maple themed charcuterie boards, Waffles served with Kinsip Whiskey Barrel Aged Maple Syrup (or Walt’s Sugar Shack syrup if you prefer), Maple bacon, granny smith and gorgonzola pizza, as well as Maple themed caesars and cocktails. They’ll also have local artist Trevor Norris playing live music on Saturday March 12th from 5:30 – 8pm with campfires to get cozy by, as well as a heated enclosure.

Karlo Estates is offering gluten-free buckwheat pancake medallions topped with Melt vegan “butter” paired to their 2020 Bubble, Sausage Party Toronto Seitan Salami paired with their 2020 Ontario Chardonnay, and maple-candied pecans with Fleur de Sel paired to their 2018 VanAlstine White. All of these delights will be available for purchase Saturdays and Sundays at the winery.

Cook Up a Maple-y Recipe

Grab your bottle of County-made maple syrup and cook up one of these recipes we’ve previously shared here on the blog:

Instructions
Mix and drizzle at will.

In a tall glass (or awesome cocktail mug) stir together the whiskey, maple syrup, and orange juice. Add the bitters and orange peel, then top off with the cider.

This recipe is a little more involved, so we’ve have a downloadable recipe card for you! 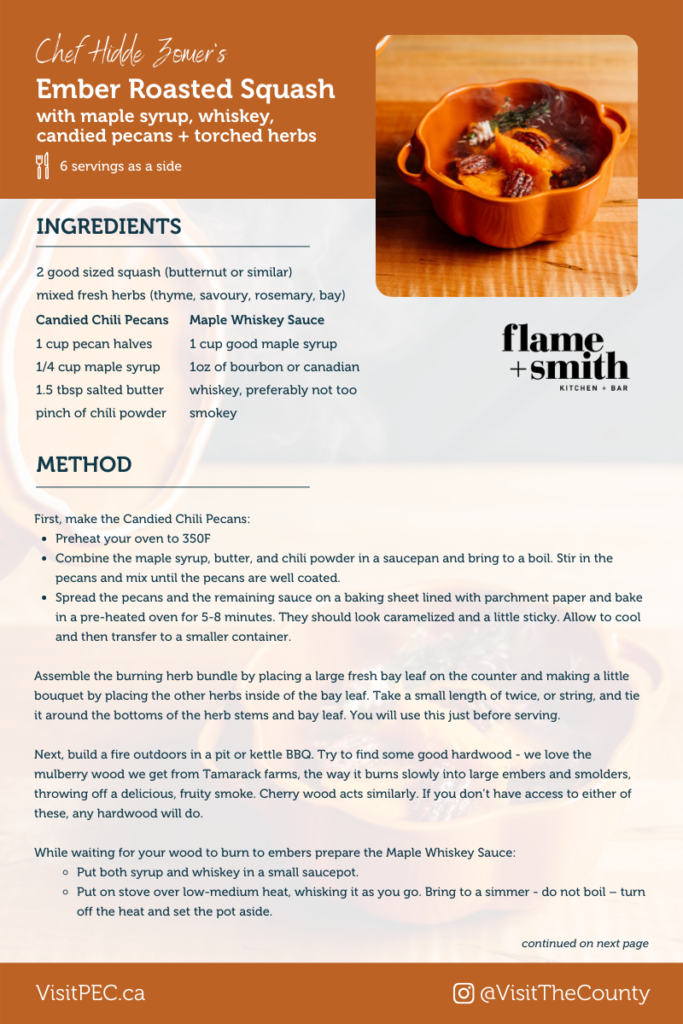 See something missing or need something updated? Send us an email at tourism@pecounty.on.ca.