How to Honour the National Day for Truth & Reconciliation in PEC 🧡

The National Day for Truth & Reconciliation is on September 30th. On this day, residents of and visitors to Prince Edward County are encouraged to honour the children who never returned home and survivors of residential schools, as well as their families and communities.

In the lead up to this national day of recognition and action, be sure to check out these events to immerse yourself in indigenous culture & history: 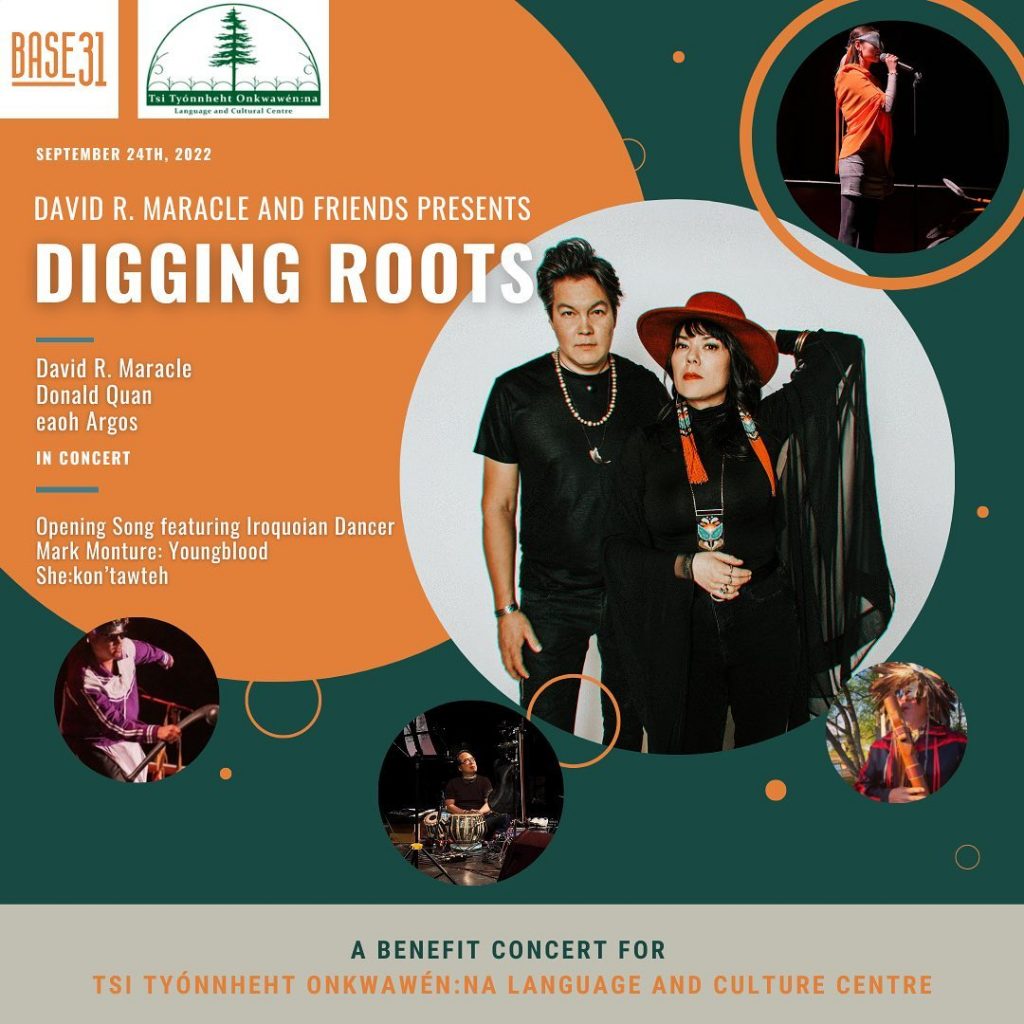 David R. Maracle and Friends presents Digging Roots: A Benefit Concert for the Tsi Tyónnheht Onkwawén:na Language & Culture Centre at Base31 on September 24, 2022

On September 24, join Base31 for a benefit concert in honour of Tsi Tyónnheht Onkwawén:na tyonkwehtáhkwen Mohawk Language & Culture Centre. Host Musician David R. Maracle & Friends come together with headliners Digging Roots for a wonderful evening of music and reflection.

David is a community member from the Tyendinaga Mohawk Territory, an Activist for Indigenous Rights & Culture, an international award-winning multi-instrumentalist musician/composer, and producer who wanted to bring this concert together, to bring attention to the Mohawk Language  program on the Territory.  He will be joined by Instrumentalist Donald Quan, with a cameo opening by Indigenous Youth Artist eaoh Argos. Don’t miss the special opening song & dance by Kanyen’kehà:ka Dancer from Six Nations of the Grand River, Mark Monture & David R. Maracle to open the show.

The main headliners of the evening are none other than the talented JUNO award-winning husband and wife duo, Digging Roots, will grace us with their style blends of folk-rock, pop, blues, and hip hop. Raven Kanatakta and ShoShona Kish won the Canadian Aboriginal Music Award for Best Group in 2007. In 2018, Shoshona was awarded the Womex 18 Professional Excellence Award, while Raven was awarded the Cobalt Award at the 2016 Maple Blues Awards.

To purchase tickets for this meaningful evening of music head to Eventbrite. All proceeds go to the Tsi Tyónnheht Onkwawén:na Language & Culture Centre.

Wampums Belts with Jamie Maracle is a free educational event presented by The County Museums at Macaulay Heritage Park on September 28th, 2022.

On September 28, join The County Museums and Jamie Maracle at Macaulay Heritage Park for an educational session on Wampum Belts.  traditional teaching tools that record Rotinonshon:ni history & knowledge. Traditions state that They have been used for over 2,000 years. Each of the dozens of belts have Their Own teachings and stories.

Come hear about the origins of the belts, how the belts are made, and the teachings that They offer. In doing so, this discussion with touch on the history of the Rotinononshon:ni as well.

Jamie Maracle has been making wampum belts for at least 25 years and has been presenting about them for almost as long. He is from Tyendinaga Mohawk Territory and has traveled to Six Nations of the Grand River, Akwesasne, Kanewake, Onondaga and more to learn the traditions of the Wampum belts, and other Rotinonshon:ni traditions.

Admission is free, though donations to the Kenhte:ke Seed Sanctuary and Learning Centre are welcome. Space is limited. Register by contacting museums@pecounty.on.ca 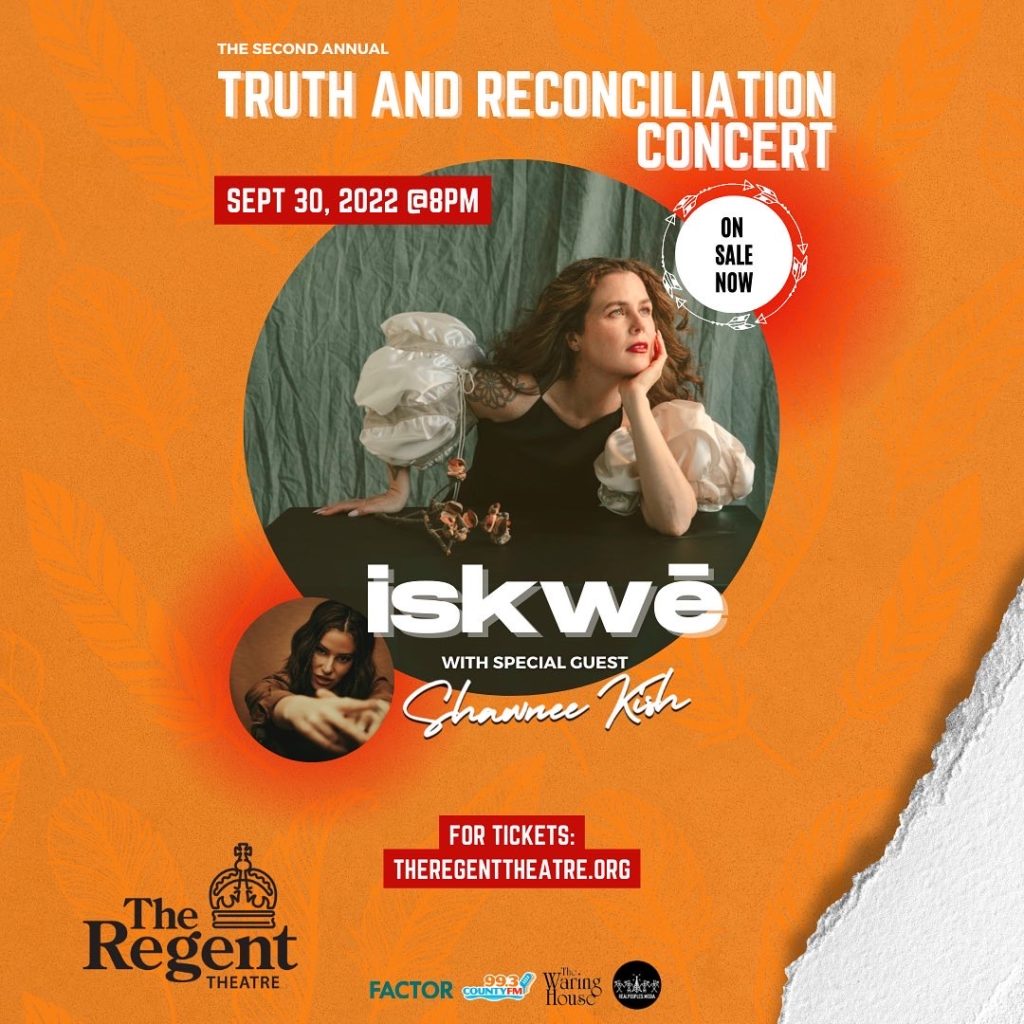 The 2nd Annual Truth and Reconciliation Concert at The Regent Theatre in Picton takes place on September 30, 2022 and features iskwē with special guest Shawnee Kish.

On September 30, join The Regent Theatre for their 2nd Annual Truth & Reconciliation Concert. Featuring the mesmerizing, multiple award winning iskwē alongside 2022 JUNO Award-nominee Shawnee Kish, this concert is sure to be an incredible evening in celebration of Indigenous culture.

Want to save on your Truth & Reconciliation Concert tickets? Friends of Visit The County can get their tickets for just $25 when they use TRUTH22 at checkout on www.theregenttheatre.org

From September 21-28 join Prince Edward County Library for a series of indigenous arts workshops with Melanie Grey. With workshops on traditional indigenous arts like porcupine quill earrings, smudge feathers, and medecine bags, each workshop will incorporate Haudenosaunee teachings about our relationship with the natural world.

Here are some other ways residents and visitors alike can take action on the National Day for Truth & Reconciliation:
⁠
🧡 seeking out stories of residential school Survivors, their families and communities⁠

🧡 continuing to respect and acknowledge the land we live on and love to visit as the traditional territory of the Haudenosaunee, adjacent to the Kanien’keha:ka community of Tyendinaga⁠

🎄 A Big Festive Weekend 🎄 Ready to get into

🍷 Toast to the Vines 🍷 Wassail is underway

🎄 Make Holiday Memories 🎄 It's that time of

✨Get Cozy this November✨⁠ ⁠ November has a

Countylicious is back from November 2-22, 2022! Click for more information.